In Trelawny, the body of 50-year-old Winston Salmon, a mechanic of Black River, St Elizabeth was discovered by residents about 1:20 pm on Friday.

His body was found hanging from a bridge with a piece of rope tied around his neck.

Salmon was taken to hospital where death was confirmed, the police said.

One Person Identified In New Falmouth Market Scam May 10, 2019)

Following investigations into a racket led by employees of the Trelawny Municipal Corporation, which saw hundreds of thousands of dollars in weekly market fees being siphoned off at the new Falmouth Market, Mayor Collen Gager says one of the crooks has been identified.

“We have investigated the matter and one worker has been identified as the chief person involved in the scam,” Gager told The Gleaner yesterday. “The investigations are continuing, and depending on what is uncovered, the police may be called in.”

Gager said that based on the findings of a probe so far, he and Andrew Harrison, the corporation’s CEO, had decided that the best way to fix the problem is to have a complete shake-up of the market’s management and employees.

“We have decided not only to remove the workers suspected to be involved in collecting fees racket, but also to put a new market management team in place,” said Gager. “We believe that instead of trying to fix a broken system, it is better to put a new system in place.”

Some of the affected workers are not pleased with the broad-brush approach the mayor has taken, arguing that based on the ongoing investigations, they believed that the mayor should know the culprits.

The new Falmouth Market, which hosts 700 vendors at a weekly fee of $2,000, should be pulling in roughly $1.4 million weekly, but last week, the mayor told The Gleaner that the municipal corporation was collecting less than half of that amount.

Tourism Minister Ed Bartlett has announced that the artisan village under construction in Falmouth, will be ready for the winter tourist season. The artisan village is located in one of the former Hampden Wharf warehouses on the Falmouth port.

Jamaica’s first artisan village, which forms part of the US$5.7-million Hampden Wharf Development Project in Falmouth, Trelawny, will be ready in time for the 2019/20 winter tourist season.

The minister made the announcement following a tour of the site on Wednesday.

Bartlett informed that work on the village is more than 75 per cent complete.

“We were advised by the contractors that we will have a complete unit ready for inspection by end of June, so we can get our entrepreneurs connected with the facility, and have a sense of what a model shop will look like,” Bartlett stated.

Ground was broken for the US$5.7-million site last March and this will be the first of five artisan villages to be established across the island.

It was funded by the Tourism Enhancement Fund and will accommodate 47 shops with five themed restaurants and bars; 12 mini stalls, 18 artisan shops and 12 major shops on 1.6 hectares of the land owned by the Port Authority of Jamaica.

Trelawny Stadium to Be Upgraded and Renamed After Usain Bolt (May 9, 2019)

On Thursday, the Minister of Sport, Olivia Grange, announced that the Trelawny multipurpose stadium is to be upgraded with several additions, after which it will likely be named the Usain Bolt Stadium. Grange was speaking during the launch of the Adidas Racers Grand Prix at the Jamaica Pegasus. 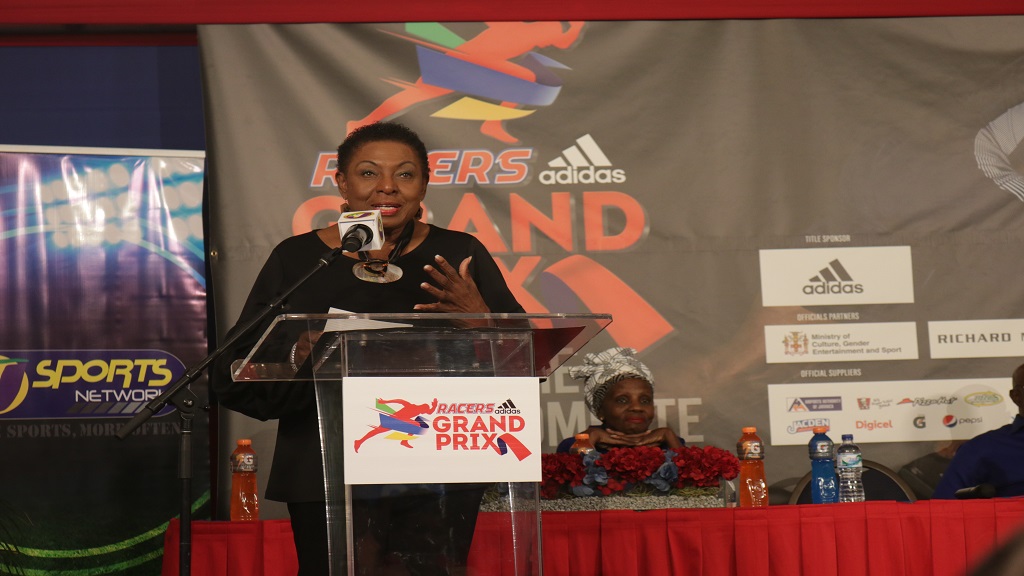 Minister of Sport, Olivia Grange speaks at the launch of the fourth staging of the Racers Grand Prix at the Jamaica Pegasus on May 9, 2019 (PHOTO: Shawn Barnes).

In addition, the capacity of Jamaica’s National Stadium is to be increased by 10,000 seats as part of an upgrade that will also see a new Royal Box being added.

To this end, the Government has signed a contract worth $30 million with Apec Consultants, to ensure that the project is properly researched before construction begins.

Grange said the contract is for the development of financing proposals for the redevelopment, expansion, and upgrading of these two national facilities.

“It will bring the National Stadium and the Trelawny Stadium up to first world standards as we ready ourselves for the development of sports and entertainment events which are critical components of nation-building,” she said.

She said the Trelawny Stadium will have a cricket academy and a running track.

“It’s strategic that we are putting in a running track as it is located in the parish of Trelawny (where Bolt is from) and we have a consent that we are discussing with a certain individual about the name of that facility once it is a state of the art facility,” said Grange.

The upgraded Trelawany facility will also boast a modern basketball arena, state of the art gym, baseball diamond and many other facilities.

Grange said the Trelawny Stadium will be promoted as the centre of sports tourism in Jamaica.

“So I am looking forward to September when we will have all the details and we will be able at that time, to indicate over what period the development of these two facilities will take place and we will be in a position to bid for international events.”

The Trelawny facility which was built for the 2007 Cricket World Cup has been severely underutilised and the facilities that will be added, such as the running track and baseball diamond are expected to change that.

Criminals Fleeing State of Emergency Running to Trelawny (May 9, 2019)

In the wake of the imposition of a State of Emergency in western Jamaica, the Trelawny Police Division says criminals have been migrating to that parish.

Superintendent Kirk Ricketts, Commanding Officer for the Trelawny Police, said most of the criminals are from St. James, which has been under greater police scrutiny due to the parish being “hit hard by the impact of lotto scamming activities.”

Superintendent Ricketts said the police are also concerned about some persons seeking jobs in Trelawny because of an increase in the construction of hotel rooms. He argued that some of these job seekers could be “undesirables” or persons wanted for various crimes who would use the opportunity to escape their past in a fresh parish.

Coopers Pen secured Group Three honours on Sunday, edging Kinloss FC 2-1 in their return-round game as the regular season of the Trelawny Football Association Major League came to an end.

Coopers Pen’s win, a repeat of the first-round game, took them to 17 points, one more than Holland United as they joined Wait-A-Bit PYC from Group One and Duanvale FC from Group Two as group winners.

Eight teams, the top two teams from each of the three groups, as well as the two best third-placed teams will qualify for the quarter-finals — where the teams will play in two groups of four each and will play each other once in the group, with the top two teams advancing to the semi-finals which will be played over two legs.